Multiple prize-winner Raaf Hekkema has an adventurous spirit: whether he plays Paganini’s violin concerto with orchestra, explores microtones on the saxophone, unravels the inhumanly complex mathematical musical puzzles that Conlon Nancarrow wrote for the pianola – Hekkema doesn’t bat an eye. Performing mainly his own arrangements, he gives approximately 100 concerts a year the world over. Hekkema has appeared as soloist with numerous orchestras and has given many international masterclasses. The solo CD ‘Paganini Caprices for Saxophone’ (MDG, 2006) earned him the German Echo Klassik ‘Instrumentalist of the Year’ title. His compositions and arrangements are published by Schott Music. 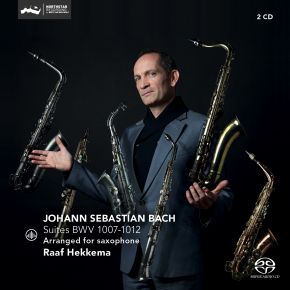 Here’s a trailer of the project:

In 2014 his Bach Partitas CD came out, alongside the Sheet Music of it.

Hekkema is co-founder of Calefax Reed Quintet (since 1985), for whom he has arranged hundreds of works, many of which have been recorded. Calefax’s repertoire spans nine centuries, Western and non-Western, from improv to contemporary classical. Additionally, the quintet has initiated projects with distinguished artists from the theatre, dance, film, animation worlds as well as those with diverse musical backgrounds. Calefax has taken lessons from, or worked with, experts in the field of early music, including Paul Van Nevel, Bartold and Sigiswald Kuijken, Jan-Willem de Vriend and Frans Brüggen. The ensemble plays at prominent concert venues worldwide, from South America to Japan, appears regularly on international radio and television, and has issued an impressive collection of CD recordings. Calefax has also been the recipient of various prizes and distinctions. Thanks to the decades-long co-operation with the members of Calefax, all of whom studied with prominent wind players from the Concertgebouw Orchestra, Hekkema’s playing has taken on a musical character unlike any other saxophonist’s. From 2014 on, Raaf Hekkema is head of the saxophone department at the Royal Conservatoire The Hague.

Het Parool: ‘Bach’s Partitas: it’s a daring enterprise, but Hekkema soon ends all doubts. In places the saxophone even wins over the violin. Unbelievable.’

Luister: ‘Raaf Hekkema is insane. Thank goodness. Otherwise we would never have heard Paganini’s renowned caprices on the saxophone (…) He plays the caprices in such a way that your attention never flags. Hekkema is insane, but it’s brilliant insanity.’

MusicWeb International: ‘Recording of the month’